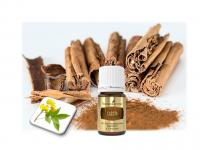 Cassia is rich in biblical history and is mentioned in one of the oldest known medical records, the Ebers Papyrus (dating from 16th century BC), an ancient Egyptian list of 877 prescriptions and recipes.

While its aroma is similar to cinnamon, cassia is chemically and physically quite different.

Cassia is a tree that grows in tropical climates. It has evergreen leaves that are similar to the laurel. Cassia has yellow flowers that develop into fruits that resemble clove buds. Known in China and Egypt, the Cassia species is the most widespread and the most consumed in the world. This spice is obtained by harvesting bark from the branches. When exposed to the sun, the bark dries and rolls slightly back on itself.

Essential oils distilled from cassia and cinnamon have biochemical profiles that are almost identical and have similar effects. Both of them are at the highest level of anti-infective effect. However, cassia is a third of the price of cinnamon. The price variation comes from very different  tastes: cinnamon is richer and more subtle, so it is sought after by the agro-food industry, which makes it a more valuable product.

Aromatic: Diffuse up to 1 hour 3 times daily or directly inhale.

Dietary: Dilute 1 drop essential oil with 4 drops V-6 or other pure carrier oil. Put in a capsule and take 1 daily or as by a health care professional.

Caution: Cassia should never be used undiluted;It should always be diluted to a maximum concentration of 10% because it caustic for the skin and mucous membranes.

Do not use for children under  5 years of age or for pregnant or breastfeeding women (with some exceptions), as it is too powerful.