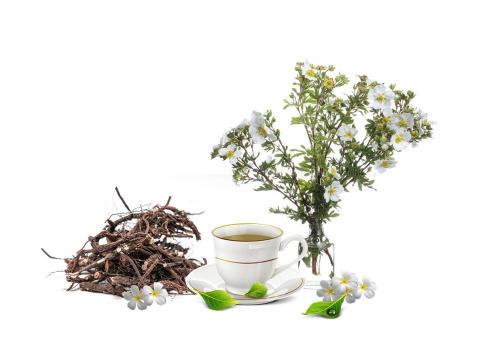 Potentilla alba L. (Rosaceae) is a valuable medicinal plant and has a long tradition of therapeutic use in Europe, especially in the eastern part of the continent. Mainly, the rhizome of this plant have been used alone or as a part of a comprehensive therapy to treat thyroid gland disorders.

Potentilla alba, also known as white cinquefoil, is one of approximately 500 species of the genus Potentilla belonging to the Rosaceae family.

White cinquefoil is traditionally used in Eastern Europe to treat diseases of the liver, cardiovascular system, and gastrointestinal tract and as a wound healing agent due to its antibacterial activity. Extracts from the aerial parts stimulate the central nervous system, whereas the underground parts of this plant increase diuresis, enhance bile secretion, and improve intestinal function. In folk medicine, an infusion of P. alba roots is prepared for painful menstruation as an antispastic and analgesic agent. A decoction of the roots with rhizomes is used for gout, rheumatism, jaundice, and dysentery. In folk medicine of Belarus, it is recommended to drink a decoction of the aerial parts of white cinquefoil when suffering from prolapse of the uterus. 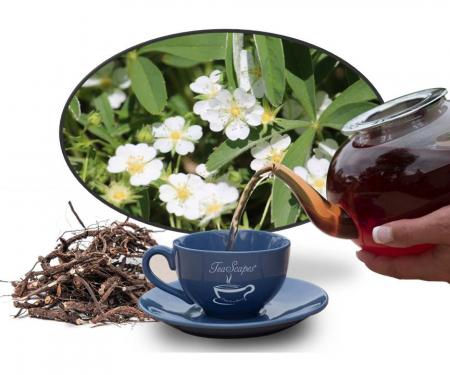 The composition of Potentilla Alba is rich in vitamins and various microelements (iron, magnesium, zinc and others). But for the thyroid gland, iodine and iodinated acid are important, which are able to normalize and stabilize the functionality of the organ. Herbal medicine will help only at the initial stage of the development of diseases.

The plant also contains tannins, saponins, flavonoids, amino acids. They have a pronounced anti-inflammatory property and at the same time they are able to activate regenerative (restorative) processes throughout the body and to ensure the renewal of gland tissues at the cellular level. The result of this action is a decrease in the size of the organ and the gradual "death" of pathologically altered cells.