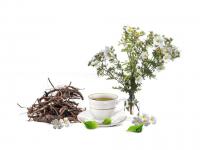 Potentilla alba L. (Rosaceae) is a valuable medicinal plant and has a long tradition of therapeutic use in Europe, especially in the eastern part of the continent. Mainly, the rhizome of this plant have been used alone or as a part of a comprehensive therapy to treat thyroid gland disorders.

Potentilla alba, also known as white cinquefoil, is one of approximately 500 species of the genus Potentilla belonging to the Rosaceae family.

White cinquefoil is traditionally used in Eastern Europe to treat diseases of the liver, cardiovascular system, and gastrointestinal tract and as a wound healing agent due to its antibacterial activity. Extracts from the aerial parts stimulate the central nervous system, whereas the underground parts of this plant increase diuresis, enhance bile secretion, and improve intestinal function. In folk medicine, an infusion of P. alba roots is prepared for painful menstruation as an antispastic and analgesic agent. A decoction of the roots with rhizomes is used for gout, rheumatism, jaundice, and dysentery. In folk medicine of Belarus, it is recommended to drink a decoction of the aerial parts of white cinquefoil when suffering from prolapse of the uterus.

Currently, the use of an infusion of the underground parts to treat hypo- and hyperthyroidism has been reported as a standard therapy, especially in Ukraine, Belarus, and the Federation. Moreover, phytotherapists in post-Soviet states, especially Russia, recommend P. alba as an adaptogen for  treatment of  heart diseases, or as a psychostimulant of the central nervous system . However, the only species from the genus Potentilla included in the latest Russian Pharmacopoeia is the Potentilla erecta rhizome.