Helichrysum italicum: from traditional use to scientific data 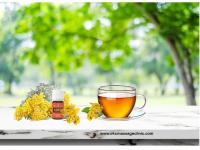 Medicinal plants play an important role in the discovery, isolation and creation of the new drugs, such as morphine, digitoxin, quinine, reserpine and pilocarpine. Helichrysum italicum (family Asteraceae) has been used for its medicinal properties for a long time and, even nowadays, continues to play an important role in the traditional medicine of Mediterranean countries. Based on this traditional knowledge, its different pharmacological activities have been the focus of active research.

The name of the genus is derived from the Greek words “helios” and “chryos”, which mean, respectively, “sun” and “gold”, in direct relation to the fact that the plant species of this genus typically have inflorescences of a bright yellow color. Helichrysum italicum also known as “perpétuas-das-areias”, “perpétuas-de-Itália”, “immortelle” or “everlasting”

In the early descriptions of the medicinal uses of plants from this genus, Helichrysum is frequently addressed as a whole, without a clear indication of the specific species to which the information pertains.

The first scientific studies on the medicinal properties of Helichrysum italicum are attributed to Leonardo Santini, whose clinical research in patients with psoriasis was conducted in the 40s and 50s of the 20th century.

According to recent studies on the traditional use of Helichrysum italicum in European countries, particularly Italy, Spain, Portugal and Bosnia and Herzegovina, its flowers and leaves are the most used parts in the treatment of health disorders such as allergies, colds, cough, skin, liver and gallbladder disorders, inflammation, infections and sleeplessness.

Studies reporting that a large variety of extracts of Helichrysum italicum can be prepared, and the resulting products differ in their chemical composition.

The most analyzed extract of Helichrysum italicum is the essential oil, which can be obtained from all the green parts of the plant.

Therefore these studies characterized Helichrysum italicum as an antimicrobial and anti-inflammatory agent. Its flavonoids and terpenes were effective against bacteria (e.g. Staphylococcus aureus), its acetophenones, phloroglucinols and terpenoids displayed antifungal action against Candida albicans and its flavonoids and phloroglucinols inhibited HSV and HIV, respectively.

Thus recent studies show that Helichrysum italicum is a medicinal plant with promising pharmacological activities. However, most of its traditionally claimed applications are not yet scientifically proven. Clinical trials are needed to further confirm these data and promote Helichrysum italicum as an important tool in the treatment of several diseases.