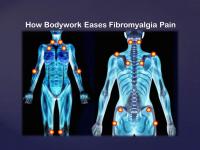 The ache. The pain. The foggy brain. With fibromyalgia, most mornings pose a challenge. Finding the will to get out of bed and move forward with life can be daunting for those in the clutches of this debilitating chronic pain disorder.

There not only is no cure, there also is no agreement about what causes fibromyalgia. Yet, despite the pain and frustration so many experience with this condition, some have found significant relief under the gentle hands of a massage therapist or bodyworker.

Fibromyalgia affects an estimated 10 million Americans, according to the National Fibromyalgia Association (NFA), and costs US consumers up to $14 billion each year to treat. Although researchers have been studying fibromyalgia for decades, there is still no definitive cause for the painful condition. Yet, most experts agree that fibromyalgia pain is due to a hiccup in the central nervous system, where the sensation of pain is processed abnormally, thereby heightening its intensity. Beyond that, experts have claimed everything from genetics to simple breathing pattern disorders could play a role in the hows and whys of the condition.

Ginevra Liptan, MD, cofounder of the Frida Center for Fibromyalgia, says stress response may be a factor. She explains that fascia, the connective tissue that “surrounds, supports, and gives form to all other tissues of the body,” and densely covers each muscle and muscle fiber, is highly innervated. Researchers think it’s this tissue that gives humans enormous extra strength in emergencies (when a mother lifts a car to rescue her child, for example). Liptan says when we get stuck, for whatever reason, in that highly stressful place of fight-or-flight response, the nervous system stays activated and the fascia stays contracted, even when the stressor is gone. This, Liptan believes, is what creates the widespread muscle pain and tenderness seen in fibromyalgia.

While research helps us learn more about fibromyalgia every day, there are still many sufferers who have their pain questioned, either by family and friends, or even more upsetting, their health-care providers. Whether it be because of the vagueness of the condition’s cause, the lack of proper diagnostic protocols, or misconceptions about the condition itself, some people don’t believe in a fibromyalgia diagnosis and don’t think of it as a real illness. The sadness and frustration of not being believed only exacerbates the condition and can lead to depression and other issues.

“I was diagnosed with fibromyalgia in my 40s, when very few people had ever heard of it,” says 76-year-old Karen Floyd from Colorado. “I had to go through several medical experts before I was diagnosed to find out it really wasn’t all in my head.”

While no one wants to have fibromyalgia, sometimes a diagnosis gives legitimacy to the pain. Beyond the diagnosis, the fibromyalgia sufferer works hard to find what helps them feel better and what makes them feel worse. For some, acupuncture helps; for others, a change in diet calms symptoms. For many, hands-on therapies like massage offer significant relief.

How Can Massage Help?

While fibromyalgia forced Floyd to quit working for a few years, she now uses massage to help manage her symptoms. “When I am really hurting, I get an hour massage every week and as I improve, I get one a month to maintain.”

For those who suffer from fibromyalgia, receiving massage or bodywork might seem like the last thing you’d look to for relief when even the thought of being touched creates stress. But working your soft tissues is actually the way to address the tightened fascia that Liptan thinks is such a critical piece of the fibromyalgia puzzle.

The caveat here is the kind of therapeutic touch clients choose to receive. While it might sound tempting to some, fibromyalgia sufferers should not seek out deep massage work, as this can trigger the nervous system and cause a flare-up of symptoms. Gentle, slow, sustained pressure is the key, and there are a variety of hands-on modalities that can help. The goal is to calm the sympathetic nervous system and let those contracted tissues break out of their stressed state.

Fibromyalgia sufferers turn to a variety of techniques and therapies to ease their aches and pains. Ultimately, finding the right combination involves personal choice and experience. But adding massage to that menu of options is worthy of consideration if you’re fighting fibromyalgia. As researchers from a 2015 study found, “Most styles of massage therapy consistently improve the quality of life of fibromyalgia patients.”

Research has found that several hands-on therapies can be extremely beneficial to combat fibromyalgia, including: myofascial release, connective tissue massage, craniosacral therapy, manual lymphatic drainage, and shiatsu. Remember: do not pursue deep massage work if you suffer from fibromyalgia—slow, gentle, sustained pressure is the key.