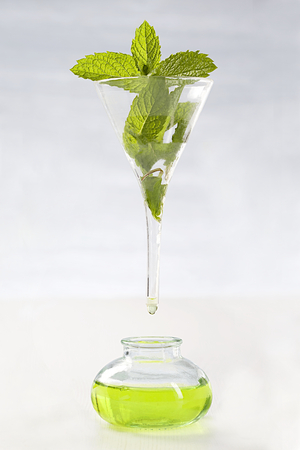 Peppermint oil, one of the world’s most time-honored and versatile natural remedies, has been employed for thousands of years as the go-to treatment for digestive problems. Like all essential oils, it is highly concentrated – Dr. Eric Zielinski says a single drop of peppermint oil in a teaspoon of honey is enough to quickly banish nausea and indigestion.

But peppermint’s usefulness isn’t limited to easing old-fashioned stomach aches and heartburn. According to recent clinical studies, peppermint oil worked better than placebo in reducing pain in patients suffering from a more contemporary ailment – irritable bowel syndrome.Thanks to its high concentrations of menthone and menthol, peppermint oil also has potent analgesic and anti- inflammatory properties, making it a valuable ally against backache, toothache and headache.  As a natural antiseptic, peppermint can help combat dandruff; as an expectorant, it relieves allergy symptoms.

But the most exciting development may be peppermint oil’s potential for treating Alzheimer’s disease.  In one study, peppermint oil – along with lavender and other essential oils – produced a sharp drop in disturbed behavior in the majority of study participants.

Remember, Dr. Zielinski advises taking no more than a single, potent drop of peppermint oil internally, and even this tiny amount should be diluted in an edible carrier oil, such as coconut oil or honey.