A Recent Insight Regarding the Phytochemistry and Bioactivity of Origanum vulgare L. Essential Oil 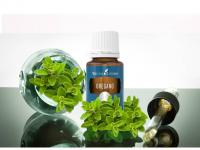 The effectiveness of Origanum vulgare L. essential oil (OEO) against a wide range of pathogenic bacteria has been extensively studied. As it has been shown by an increased number of studies in the field, OEO represents an efficient alternative as an antimicrobial agent against both Gram-positive and Gram-negative bacterial strain. The disinfectant and antibacterial properties of the OEO were attested for the first time in ancient Greece, where it was frequently utilized for treating bacterial skin and wound contaminations. It was also used as a food preservative.  Carvacrol and thymol represent the two primary phenols, constituting almost 78–85% of the OEO and they are responsible for the plant’s antimicrobial properties . The antibacterial activity of the OEO results from the high level of thymol which, according to Lambert et al. ties to membrane proteins and increases the permeability of the bacterial cell membrane. In the same way, carvacrol acts on bacterial cells causing structural and functional damage, which increases bacterial cell membrane permeability.

Uses of oregano in ethnomedicine have been linked to stomachic, carminative, expectorant, and emmenagogue properties. It has been indicated as tinctures or teas in respiratory and digestive disorders, but also as ointments to treat wounds. Its traditional uses include indigestions, diarrhea, cough, and bronchitis. It has also been used as a remedy against pruritus, headaches, and depression. Particular uses have been mentioned for different parts of the plant: while the aerial parts have been used in pain, cough, or sexual dysfunction, the seeds were used in urinary tract infections or menstrual disorders and the flowering branches were used externally by rubbing in place of fractures or to treat toothaches. An ethnobotanical study showed that tea made from Origanum vulgare herb was traditionally used in Transylvania to treat sore throat. In Turkey, the flowering branches and the leaves were prepared as infusions and used for cold, flu, headache, or toothache. Arial parts of oregano represent a habitual spice, especial in Mediterranean countries. In addition to culinary and medicinal uses, oregano was also used in perfumery or as flavoring for alcoholic beverages [

Due to its multiple pharmacological activities, especially due to its antimicrobial, anti-inflammatory, and antitumor effects, oregano essential oil can be used as natural alternative to synthetic drugs, being a promising candidate for therapy of various conditions with microbial, inflammatory and tumor etiology.