THE SECRETS OF HELICHRYSUM: CHEMICAL FOCUS 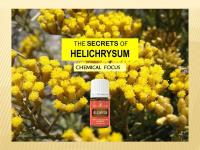 Helichrysum essential oil has been used in traditional Mediterranean and South African medicine practices for centuries, particularly for the treatment of various bacterial and fungal infections. Today, helichrysum oil has become increasingly popular due to the numerous health and beauty benefits it offers, especially for the skin. Helichrysum oil is made up of a unique blend of constituents, including two main ingredients, a-pinene and italidione, which are discussed below.

A-pinene is primarily responsible for Helichrysum oil’s antimicrobial, antibacterial, antiviral, and antifungal properties. This makes it ideal for use when fighting a variety of conditions, including acne, respiratory infections, and intestinal infections. A 2001 study found that Helichrysum oil can relieve infections caused by staphyloccus aureus by reducing the strain’s growth. A different study determined that the a-pinene in the oil plays a powerful role in its ability to fight off fungal infections by interfering with fungal metabolism and preventing the fungus from finishing its life cycle. It is said to be especially effective as a natural candida cure.

Helichrysum oil, which has strong antioxidant properties, is proven to help inhibit the signs of aging and sun damage, as well as reduce the appearance of wounds, scars, and bruises. The italidione it contains is almost entirely responsible for this because it works to regenerate new tissues and cells below the skin’s surface, while also enhancing blood circulation underneath. This allows wounds to heal faster, thus reducing bruising and scar tissue.