The Secrets Of Hyssop: Chemical Focus 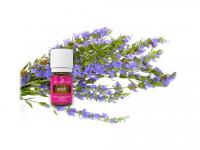 The use of hyssop essential oil dates back to ancient times. In fact, this Mediterranean herb is mentioned in the Bible as being sacred or holy largely because of the numerous health benefits it provides. Its powerful properties are the result of its constituents, including two of its most active ingredients, isopinocamphone and myrcene. Several of hyssop oil’s top benefits that can be attributed to these two constituents are discussed below.

The large amount of isopinocamphone in hyssop oil, along with the smaller amount of marrubiin, are primarily why this essential oil has been used since ancient times to treat various chronic and acute respiratory conditions, such as asthma, bronchitis, colds, and the flu. Together, they loosen phlegm trapped in the respiratory tract, opening up congested airways and alleviating congestion, coughing, and even shortness of breath, while simultaneously opening up congested airways

Additionally, hyssop oil has been shown to impede the invasion of potentially harmful eosinophils and reduce the levels of IgE in the body, which causes allergic reactions.

Studies have determined that the constituents in hyssop oil, especially myrcene, work collectively to fight off infections. A 2008 German study found that it is particularly effective at fighting off genital herpes. Specifically, plaque formation was reduced by 90% when hyssop essential oil interacted with the herpes virus.

Science has also shown that the myrcene in hyssop oil works to stimulate the production of crucial digestive secretions, including acid and bile, which aids in digestion. This makes it easier for the body to break down food into important nutrients.