Seeing the Unseen of the Combination of Two Natural Resins, Frankincense and Myrrh: Changes in Chemical Constituents and Pharmacological Activities 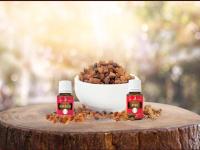 Cancer and other chronic diseases seriously threaten human health in today’s world. Due to these diseases mortality rate is increasing year-by-year. In modern medicine, in spite of great progress in treating these diseases, most FDA-approved single-target drug preparations have some defects in the treatment of complex chronic diseases. Some even have serious side effects. Natural herbal medicines usually have the historical experience of traditional medication and the characteristics of multi-component, multi-link, and multi-target, which make them have potential advantages in the treatment of chronic diseases with relatively low side effects. Among many traditional natural medicines, resins frankincense and myrrh have been proven to be effective in the treatment of inflammation and cancer.

Frankincense and myrrh are two olive plants from different species and genera. Frankincense is a hard, gelatinous resin exuded from the trunk incisions of the frankincense tree, Boswellia carterii or other species in the genus Boswellia of the family Burseraceae, mainly from Somalia, Ethiopia, and India. Myrrh is an oily, gelatinous substance exuded from the bark of Commiphora myrrha  or various other species of Commiphora, and can be classified as natural myrrh or colloid myrrh. Myrrh grows   mainly in tropical and subtropical areas, such as Somalia, Ethiopia, and the southern Arabian Peninsula. In the West, frankincense and myrrh are often used as incense for religious occasions, while in TCM and Indian Ayurvedic medicine, they are used as natural treatments for chronic diseases.

In recent years, the pharmacological research on frankincense has focused mainly on the anti-inflammation and anticancer effects of extracts and chemical components, along with other pharmacological effects, including anti-ulcer, memory improvement, and anti-oxidation.

Pharmacological Activity of Myrrh modern studies have shown that the main pharmacological effects of myrrh are anti-inflammatory, anticancer, analgesic, and antibacterial, among which the anticancer effect has been studied the most. After the combination of frankincense and myrrh forms a blend, a series of changes take place in their chemical composition, such as the increase or decrease of the main active ingredients, the disappearance of native chemical components, and the emergence of new chemical components. At the same time, the pharmacological effects of the combination seem magically powerful, such as synergistic anti-inflammation, synergistic anticancer, synergistic analgesic, synergistic antibacterial, synergistic blood-activation, and so on. Therefore, based on the research value and great prospects of the significant efficacy of frankincense–myrrh compound for various chronic diseases, more clinical studies are needed to verify the synergistic efficacy and safety of the frankincense–myrrh compound.