The Synergistic Hepatoprotective Activity of Rosemary Essential Oil and Curcumin 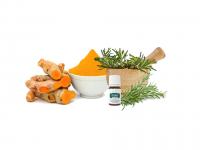 Curcumin is a natural product obtained from the rhizome of Curcuma longa. Curcumin, a major bioactive compound in turmeric herb, is known for its anti-inflammatory and antioxidant activity, which helps protect tissues and organs. Curcumin retains a comprehensive range of biological, medicinal, and pharmacological activities and has been used for many diseases and syndromes. Curcumin has demonstrated to have antioxidant, antimicrobial, anti-malarial, and anticancer activities. Furthermore, the anti-thrombotic , anti-hyperlipidemic , hypoglycemic, anti-inflammatory agent , anti-rheumatic, and myocardial infarction protective  effects of Curcumin were also well documented. Also, Curcumin is well-recognized for its hepatoprotective activity.

Rosemary (Rosmarinus officinalis L., Lamiaceae) is a medicinal and aromatic plant widely spread in the Mediterranean region, but is now cultivated all over the world. Traditionally, it has been used as a stimulant and mild analgesic and has been prescribed for headaches, poor blood circulation, inflammatory diseases, and physical and mental fatigue. The pharmacological effects of Rosemary are mainly due to its distinguished antioxidant activity. The essential oil of Rosmarinus officinalis retains numerous health benefits and therapeutic effects. The oil relieved dyspepsia and mild spasms of the gastrointestinal tract (GIT), as well as relieving minor peripheral circulatory disorders. Furthermore, several pharmacological activities can be attributed to the oil components such as antidepressant, anti-inflammatory, and anticancer effects. The hepatoprotective effects of Rosmary are well documented and have been observed in different experimental models of liver injury. Rosmary essential oil and Curcumin are both natural products of high value due to their medicinally and pharmacologically proven activities, including their hepatoprotective actions.

Acetaminophen (paracetamol) is the number one cause of acute liver failure in the USA and UK. Recently, researchers evaluated the activity of curcumin and rosemary CT 1,8-cineole essential oil alone and in combination in a preclinical model of acute liver injury caused by acetaminophen. What the researchers found was that ingesting rosemary essential oil  with curcumin not only increased the bioavailability of curcumin, it produced a synergistic activity that protected the liver better than either natural product alone.