Thyme and Rosemary Essential Oils And Prevention of Osteoporosis 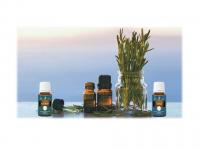 Osteoporosis is a skeletal disease described by a decrease in bone mass and bone mineral density in addition to bone degradation, which may increase bone fracture risk and skeleton frailty and induce dangerous diﬃculties.
Calcium is an essential component in bone formation and is considered as the key element of hydroxyapatite, and its use as a therapy for bone resorption is evaluated. Improving the dietary intake of calcium is a nutritional target to prevent osteoporosis.

Bone resorption sorely aﬀects public health, and there is no eﬀective and secure way to restore lost bone; many pharmacological drugs, such as denosumab, risedronate, alendronate, and bisphosphonates, are used for treatment of osteoporosis. However, the medications most commonly used are not suitable to take and action is often weak. In addition, many patients avoid taking the medicines because of worry about side eﬀects such as nausea, dizziness, sickness, ands sore of the gastrointestinal tract.
The role of nutrition in bone formation is quite signiﬁcant. Choosing a balanced diet with high nutritional value can signiﬁcantly contribute to enhance skeletal health. Appropriate food is an essential element for bone health, resulting in the treatment and prevention of bone diseases .
However, many medicinal herbs prevent osteoporosis and treat bone resorption. Polyphenols extracted from plants attract big attention due to their antimicrobial and antioxidant activities. Phenolic compounds have a valuable free-radical scavenging property, which is determined by their reactivity with other antioxidants compounds and their metal chelating activities.
Thyme (Thymus vulgaris L.) is a medicinal herb containing many volatile compounds and essential oils and is widely used worldwide and considered to have potential protective impact against bone loss . The essential oils are nontoxic and biodegradable compounds with antimicrobial activity and without side eﬀects or intestinal troubles after eating. Thyme essential oil consists mainly of thymol, carvacrol, c-terpinene, and β-caryophyllene. It has been conﬁrmed that the biochemical impacts of thymus vulgaris are primarily due to the existence of phenolic compounds, especially thymol and carvacrol.
Rosemary (Rosmarinus oﬃcinalis L.) is supposed to be one of the most important herbs that has many medical beneﬁts, the main volatile compounds are 1,8-cineole, camphor, α-pinene, and α-terpineol . Rosemary is widely used as a ﬂavoring agent in food industries . However, rosemary has potential pharmaceutical beneﬁts in prevention and treatment of many public health issues. The supplementation with thyme and rosemary in low calcium diet is marked by improving intestinal calcium absorption and may lead to prevent or decrease bone loss and restore the decreased levels of plasma Ca to normal values. It was found before that some herbs had an impact on bone metabolism including thyme and red clovers, they improved the absorption of calcium from the gastrointestinal tract, and they have an arraying eﬀect to keep the calcium homeostasis. Nutritional factors clearly take a part in the link between inﬂammation and osteoporosis, and the concordance of osteoporosis and inﬂammation is supported by emerging molecular evidence of mediating immunological factors. Advanced understanding of the bone remodeling process proposes that factors engaged in inﬂammation are linked with those critical for bone physiology and remodeling.
A relationship between CRP level and bone mineral density has been proved in many inﬂammatory diseases, as well as in healthy humans, suggesting a correlation between subclinical systemic inﬂammation and bone loss. The researchers showed that thyme and rosemary have strong eﬀect against inﬂammation and oxidative stress, and thyme is traditionally used for its antispasmodic and antiseptic actions. Furthermore, thyme has many activities against microbes, fungi, and viruses and also has antioxidative properties. The essential oil of thyme is a mixture of monoterpenes, and one of the major components of this oil is thymol. Thymol shows many biological properties including antioxidant, anti-inﬂammatory , and free-radical scavenging properties . Rosemary is known to be used in traditional medicine all over the world, and the pharmacological and medical properties of rosemary include anti-inﬂammatory and antioxidant activities. Recent researches also demonstrated that rosemary essential oils signiﬁcantly decrease the levels of TNF-α in blood.
The results clearly show that essential oils and monoterpenes of thyme and rosemary, which are widely used as food additives and in various medical applications, are effective inhibitors of bone resorption and have numerous beneﬁts on bone formation and against inﬂammation. However, thyme has more protective eﬀect than rosemary against bone resorption and osteoporosis.