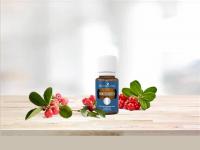 The Gaultheria procumbens wintergreen plant is a member of the Ericaceae plant family. Native to North America, especially cooler parts of the Northeast United States and Canada, wintergreen trees that produce bright red berries can be found growing freely throughout forests.

The term "wintergreen" once commonly referred to plants that remain green (continue photosynthesis) throughout the winter. The term "evergreen" is now more commonly used for this characteristic. The plant's common name of wintergreen refers to the plant's ability to remain "green in winter", as suggested by the Dutch wintergroen, and German Wintergrün.

What is another name for oil of wintergreen? Also sometimes called eastern teaberry, checkerberry or gaultheria oil, wintergreen has been used for centuries by tribes native to North America for its antioxidant and anti-inflammatory effects and more.

North American Indians chewed the leaves of the wintergreen plant for their distinct flavor, used them in the treatment of aches and pains, and to aid in breathing during hard work.  French explorers used wintergreen leaves in hot infusions, thus leading to the term ‘Thé du Canada’, the tea of Canada.  During the American war of independence, wintergreen leaves served as a replacement for Chinese tea.  Folk remedies also used the wintergreen plant for body aches, cold symptoms, colic, headaches, inflammation, pain, skin diseases, sore throats, rheumatism, and tooth decay.

Research shows that wintergreen oil has the ability to act like a natural analgesic (pain reducer), antiarthritic, antiseptic and astringent. It primarily contains the active ingredient methyl salicylate, which makes up about 85 percent to 99 percent of this essential oil.

Wintergreen is one of the best sources of this inflammation-fighting compound in the world and believed to be one of only several plants that naturally supply enough to form an extract. Birch essential oil also contains methyl salicylate and therefore has similar tension-reducing benefits and uses.

What is wintergreen oil used for?

This oil is naturally an antioxidant, energizing and immune-enhancing, since it lowers inflammation and reduces pain. Wintergreen oil is very helpful to treat fatigue along with lung, sinus and respiratory illnesses.

Wintergreen is absorbed into skin quickly and acts like a numbing agent, similar to cortisone. It also promotes blood circulation and cools irritation, which is comforting to swollen skin.

This oil is used as an active ingredient in many topical pain relievers to help ease muscle joint and bone pain. Today, it’s commonly used for reducing other painful conditions, too.

For example, wintergreen is used to help with headaches, chronic nerve pain, PMS symptoms and arthritis. This is because wintergreen naturally contains active constituents that work similarly to aspirin.

The leaves are also beneficial for preventing and treating digestion problems, including stomachaches, cramps, gas and bloating. Because wintergreen oil can help fight inflammation, it’s also effective for helping treat a wide variety of illnesses — everything from respiratory issues like asthma to colds, flu, kidney problems and even heart disease.

No current documented studies are available on the external or internal uses of wintergreen oil. However, methyl salicylate is tentatively is accepted by the U.S. Food and Drug Administration as an over-the-counter (OTC) external analgesic, and it is included in many OTC products intended to relieve mild muscle and joint pain. There are current studies on the active constituent of wintergreen, methyl salicylate, for use in topical creams in the treatment of pain relief, possible antimicrobial use in dental care, and the comparison of salicylate levels between the oil of wintergreen and synthetic methyl salicylate cream.