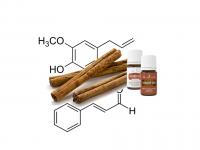 With a scent reminiscent of an apple pie fresh out of the oven, cinnamon bark essential oil has a familiar and comforting scent that makes it a favorite of aromatherapists. Cinnamon bark is made up of several constituents, including eugenol, and its’ most active ingredient, cinnamaldehyde. These two constituents are primarily responsible for many of the health and beauty benefits cinnamon bark oil has to offer. Here’s a quick look at some of its top benefits.

Today, an increasing number of infectious diseases are becoming resistant to drugs. Pseudomonas aeruginosa, the leading cause of death by gram-negative bacteria, is one example. In a study published in 2016, researchers revealed that the cinnamaldehyde in cinnamon bark oil showed strong microbial action against the bacterium. Though further studies are warranted, researchers believe cinnamon bark oil could be used as an alternative to multidrug resistant P. aeruginosa.

Additionally, there is strong evidence that cinnamaldehyde offers brain boosting benefits, particularly in patients suffering from Alzheimer’s disease. Researchers have also determined that cinnamon can prevent the swelling of isolated brain cells that have been affected by a stroke or traumatic brain injury. It does this significantly reducing mitochondrial membrane potential in the cells. These abilities also make cinnamaldehyde a potent fighter against stress and depression.

Multiple studies have been performed to identify the health benefits of the eugenol contained in cinnamon bark oil. It has been found to have multiple pharmacological properties, including anti-inflammatory, anti-carcinogenic, anti-diabetic, antimicrobial, and anesthetic, as well as neuroprotective abilities.