The Use of Abdominal Massage to Treat Chronic Constipation 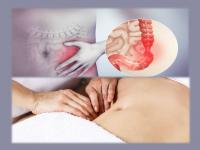 Constipation is a disorder of gastrointestinal motility characterized by difficult or decreased bowel movements (less than three times a week). It may be caused by a change in diet, medication, a change in daily routine, abdominal surgery or acute emotional stress. Longer-lasting constipation, however, generally occurs when disease, poor diet, muscle spasticity, physical obstructions, sluggish contractions, or other factors cause stool to move through the colon at a slower-than-normal pace, until by the time it reaches the end of the large intestine it has lost a great deal of water and has become hard, dry, and difficult to eliminate.  Even those who have a bowel movement every day may have hidden constipation, that is, feces remaining in any of the three divisions of the colon or in the rectum itself.

According to Naturopathic medicine there are three primary causes of constipation, atonic (due to dilated or ptosed intestines, loose rectal muscles, or inactivity), spastic (due to irritation caused by food, medicines, parasites or emotional stress) or obstructive (due to adhesions from surgery or infection).  Treatment includes nutrition (including dietary changes, probiotics, digestive enzymes and dietary supplements), internal and external hydrotherapy, botanical and homeopathic medicines and manual therapies such as massage and visceral manipulation. Colon hydrotherapy may be employed as a method of stretching the muscles and fascia of the colon from within.

From the late 1800’s through the 1950’s, in both Europe and the United States, Swedish massage, using petrissage, effleurage, vibration and tapotement strokes applied to the anterior abdominal wall, was a widely used treatment for constipation. Practitioners believed that by applying pressure to the anterior abdominal wall, they were compressing the digestive organs between the massaging fingers and the posterior wall of the abdominal cavity and stimulating peristalsis. Some practitioners targeted massage to the large intestine so specifically, that one prominent physician recommended the abdomen of the constipated patient be X-Rayed prior to massage to identify the colon's exact location.

Abdominal massage, once an accepted method of treating constipation, is no longer standard of care, but may be a desirable therapy for this condition because it is inexpensive, non-invasive, free of harmful side-effects, and can be performed by patients themselves. However, until recently, evidence for its effectiveness was not strong enough to make a recommendation for its use in constipated patients. Since 1999 studies have demonstrated that abdominal massage can stimulate peristalsis, decrease colonic transit time, increase the frequency of bowel movements in constipated patients, and decrease the feelings of discomfort and pain that accompany it. There is also good evidence that massage can stimulate peristalsis in patients with post-surgical ileus. Individual case reports show that massage has been effective for patients with constipation due to a variety of diagnosed physiologic abnormalities, as well as in patients with long-term functional constipation.

The use of abdominal massage to treat chronic constipation - ScienceDirect